Aoun Vows: Corruption will Be Uprooted, Environment will Become Clean

Lebanese President Michel Aoun vowed Sunday that “corruption will be eradicated”, stressing that he will not allow any politician to violate the constitution as part of the “strong State” he’s willing to achieve.

Addressing huge crowds who gathered at the Baadba Palace to congratulate him on his election, Aoun said a strong Lebanon is built on a constitution which all politicians shall respect, “we won’t allow anyone to violate the Lebanese constitution.”

“Today, we can stand proudly and defiantly before all people and countries because we have created our national unity and we will now begin the second journey, which is building the country,” the president said.

While promising not to allow for any intervention in Lebanese affairs, Aoun vowed that it was time to start building a strong Lebanon and assured that independence and sovereignty shall not be considered an enmity with others.

On the reform plan, Aoun pledged that huge projects were awaiting the government. “People wants their basic needs to be secured (water, electricity, infrastructure, etc..),” he said, adding “that’s why we have reached the presidency carrying developmental projects.”

He also said corruption will be uprooted and the environment will become clean. 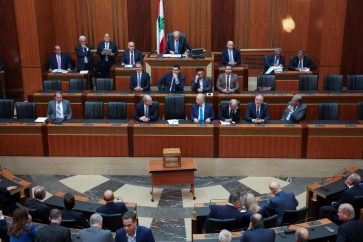