WHO Warns of ‘Significant Resurgence” of Coronavirus in Europe, as Pandemic Worsens Globally

The World Health Organization (WHO) warns about a “significant resurgence” of cases of the new coronavirus in nearly a dozen European nations, saying the risk of another outbreak has now become a “reality.”

WHO regional director for Europe, Hans Henri Kluge said in a statement, “For weeks I have spoken about the risk of a resurgence as countries adjust to measures.”

“In several countries across Europe, this risk has now become a reality — 30 countries have seen increases in new cumulative cases of the past two weeks,” he said.

He said in eleven countries, including, Albania, North Macedonia, Sweden, and Ukraine, “accelerated transmissions have led to a very significant resurgence that if left unchecked will push health systems to the brink once again in Europe.”

Europe has been virtually paralyzed over the last months by lockdown measures that were put in place to curb the pandemic, in March. The European Union member states eventually emerged from lockdown last month, with many of them reopening their borders to each other.

They have also dropped requirements for EU nationals to quarantine when visiting.

The new virus, which first emerged in China and quickly spread to the rest of the world, has so far infected some 9,611,062 people and claimed the lives of 489,318 others across the globe, according to data compiled by Johns Hopkins University.

20 million could be infected in US

Senior government officials, however, say more than 20 million people could have contracted the coronavirus, 10 times more than the official tally.

The estimate, from the Centers for Disease Control and Prevention, comes as government officials note that many new cases are showing up in young people who do not exhibit symptoms and may not know they have COVID-19.

Australian Prime Minister Scott Morrison says he will stick with plans to further ease coronavirus curbs, despite a rise in COVID-19 cases in the second most populous state of Victoria.

“There will be outbreaks and what matters is that we continue to build our capability to deal with those outbreaks,” Morrison said on Friday.

His government has deployed ambulances and mobile test centers in a testing blitz across the southeastern state which, on Friday, reported its tenth straight day of new cases in double digits.

China on Friday reported 13 new cases of the viral infection, 11 of which were reported in the capital Beijing.

The mainland has so far had a total of 84,701 confirmed coronavirus cases and 4,641 deaths related to the epidemic.

India has now had half a million coronavirus cases, as it recorded its largest 24-hour spike with 17,296 new infections.

This pushes the nations’ total to 490,401, according to the health ministry, which also reported another 407 deaths in the past 24 hours, taking total fatalities up to 15,301.

Brazil’s Bolsonaro ‘may have contracted coronavirus’

Brazil’s President Jair Bolsonaro says he might have contracted the coronavirus.

Boslonaro said on Thursday that he has already tested negative for the virus multiple times weeks earlier.

The far-right president, who has constantly downplayed the threat of the pandemic and described the virus as a “little flue,” was on Thursday ordered by a judge to stop ignoring the mask decree in Brasilia and wear a face mask in public. 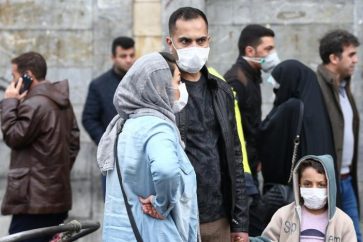