Iran DM Confirms Missile Test: Nobody Can Influence Our Decision

Iran confirmed on Wednesday that it had tested a ballistic missile, but denied that was a breach of its 2015 nuclear deal with world powers.

“The action was in line with boosting Iran’s defense power and is not in contradiction with the JCPOA (the nuclear deal) or Resolution 2231,” Defense Minister Hossein Dehghan said.

He was referring to a UN Security Council resolution that bans Iran from developing missiles that can carry nuclear warheads.

“This test was in line with our ongoing programs,” the ISNA news agency quoted Dehghan as saying.

“We have previously announced that we will execute the programs we have planned in production of defense items meant for our national interests and objectives. Nobody can influence our decision.”

“We hope that Iran’s defense program is not used by the new US administration… as a pretext to create new tensions,” Foreign Minister Mohammad Javad Zarif said.

His comments came ahead of emergency consultations at the UN Security Council on the missile test convened at Washington’s request.

US ambassador Nikki Haley told the meeting that the test-firing of the medium-range missile was “absolutely unacceptable”.

“The United States is not naive. We are not going to stand by. You will see us call them out,” she said. 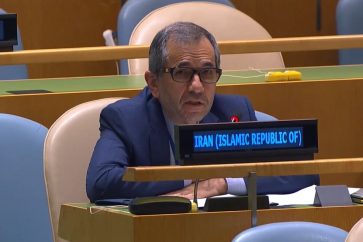