Spain is spearheading calls for governments to start tackling COVID-19 as any other endemic respiratory virus like seasonal flu, despite WHO opposition and warnings that the approach is premature.

With governments and populations worldwide desperate for an end to the pandemic, discussion about when the virus might be reclassified has intensified.

“Spain wants to lead this debate because it is timely and necessary to do so,” Health Minister Carolina Darias has said, adding that Spain asked the European Centre for Disease Prevention (ECDC) to “study new strategies” to deal with Covid.

Spain is in a good position to open the debate, having one of the world’s highest vaccination rates with 90.5 percent of its population over the age of 12 fully immunized.

But the question has sparked disagreement between governments seeking some sort of normality and some parts of the medical community which advocate keeping its guard up.

Spain’s left-wing government has been a prominent advocate of reclassifying COVID-19 as an endemic disease with milder seasonal outbreaks that humanity can live with, like the flu.

The country is working with the scientific community to eventually shift from “managing a pandemic to managing a disease which we hope science will reclassify as an endemic illness,” Spanish Prime Minister Pedro Sanchez said this week.

Although Omicron has triggered a surge in infections, there have been fewer deaths and lower rates of hospital admissions, with many governments easing restrictions, reducing isolation times and loosening border controls.

“As COVID becomes endemic, we will need to replace legal requirements with advice and guidance,” British Prime Minister Boris Johnson said Wednesday, announcing that restrictions were being lifted in England.

Arguing “we must learn to live with COVID” in a similar way to seasonal flu, British Health Secretary Sajid Javid said the government would set out a long-term plan for living with coronavirus within months.

On Tuesday, however, World Health Organization chief Tedros Adhanom Ghebreyesus insisted that the pandemic was “nowhere near over,” warning that new variants were still “likely to emerge.”

The UN health organization also warned against the temptation to play down the seriousness of an endemic disease. 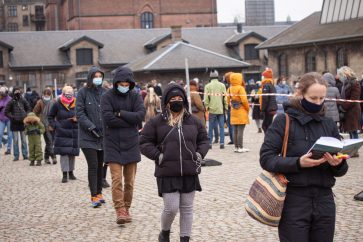 WHO Says Global COVID-19 Emergency Could End this Year