Chief of Staff of the Iranian Armed Forces Major General Mohammad Baqeri said on Wednesday that the armed and navy forces of the Islamic Republic of Iran will not allow enemies to flex muscles against Iran.

Speaking during the ceremony of the annexation of the “Zereh” (meaning ‘Armor’ in Farsi) missile launcher and helicopter carrier dubbed “Makran”, Major General Baqeri said that today’s sea arena is unique and incredibly valuable for the whole world and for the Iranians.

God Almighty has granted this great nation the blessing of having beaches and proper access to the open seas, and we have to properly utilize this God-given gift to expand the divine power of Islam as necessary and to defend the interests of our country beyond the borders and to defend Iran’s maritime borders, which include valuable fossil energy resources and our maritime trade routes, to be properly defended, supported and secured, he noted.

He added that this God-given gift can lead to tremendous development and progress of the country at the regional and global levels.

The geo-strategic advantage of these valuable beaches and open seas can bring maritime and defense authority to our beloved country, he noted.

He underscored that the armed forces, especially the Army’s Strategic Navy, along with their valuable defense missions, have stepped in and moved alongside their valuable defense missions by deploying on the coasts of Makran as a pioneer in the development of these deprived areas and have begun to take valuable measures, and we hope that the government and other important parts of the country will continue to develop and see advanced beaches and areas in this region.

Over the last decade, the Navy has carried out significant missions with authority in remote seas against piracy and terrorist moves of enemies, he said.

Following deploying on the shores of the Sea of Oman, it could permanently deploy its fleet in the Indian Ocean, the Red Sea, and distant seas, he further noted.

Referring to the escort of a large number tankers and commercial vessels of the Islamic Republic of Iran by the Army-Navy, he stated that if the world’s naval forces are proud of their steel and fire, Iran’s Navy, in addition to those features, has faith in the divine power that is the backing of manpower to overcome all threats.

Touching on the recently unveiled helicopter carrier “Makran” and a missile-launching warship “Zereh” in Iran, Makran will be a worthwhile naval vessel base for further development of the Islamic Republic of Iran’s support and operational activities in the remote seas.

The construction of such valuable warships proves that the country’s defense industry has successfully passed the enemy’s sanctions and has built the most efficient weapons and equipment by Iranian manpower and domestic facilities, he underscored.

He called the unique unity of the armed forces another valuable point.

Stating that the armed forces are united today, he said that the army and the IRGC are two powerful arms of the Islamic Republic of Iran, and the defense industry, as their powerful backing, performs their defense missions with full power and complete synergy, so that the enemies have no power to flex muscles in the waters and regions under the rule of the Islamic Republic of Iran.

“If we witnessed the unveiling of the IRGC Navy’s underground missile town in the past week, this week we will also see the annexation of two valuable vessels of the Strategic Navy of the Islamic Republic of Iran, and every week and every month we see the increase in the defense power of Iranians and we are proud of it.”

Referring to the recent movements of US forces in the region, Major General Baqeri stated that Iran’s enemies have taken actions against Iranians by flying their long-range aircraft in the region and displaying seemingly powerful shows of force to threaten and display power, but they should know that the powerful armed forces of the Islamic Republic of Iran and the naval forces will not allow them any show of force.

He further noted that the enemy knows well that their power is fragile, and what is seen in their country these days is the beginning of the decline of American power as a criminal regime that has displayed state terrorism in various dimensions.

Stressing that the Islamic Republic of Iran will support all its interests more powerfully as before, he emphasized that Iran will put the Red Sea, which has faced some limited aggression on the Islamic Republic’s merchant vessels in recent times, back in its naval patrol area and will maintain the full security of its vessels and fleet of tankers and commercials in the Red Sea as well. 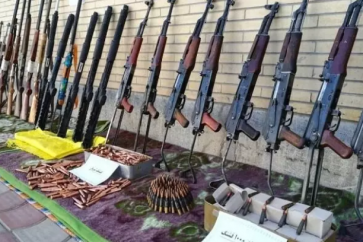