Israeli tanks and warplanes bombed Hamas positions in Gaza Friday and the Palestinian Resistance movement retaliated with rockets as a three-week-old flare-up showed no let-up despite international mediation efforts.

Warning sirens sounded before dawn in Israeli communities near the border as the pre-dawn air strikes and shelling prompted Hamas to launch a salvo of six rockets in retaliation.

The Palestinian Resistance group said the rockets were a “direct response to the escalation by the Israeli occupier”.

Israel has bombed Gaza almost daily since August 6, with Palestinian Resistance has been launching airborne incendiary devices and, less frequently, rockets launched across the border in response to harsh blockade on the coastal enclave.

The fire bombs, crude devices fitted to balloons or plastic bags, have triggered more than 400 blazes in the Zionist entity’s south, according to fire brigade figures.

The Israeli occupation has been also banning Gaza fishermen from going to sea and closed its goods crossing with the territory, prompting the closure of Gaza’s sole power plant for want of fuel.

An Egyptian delegation has been trying to broker a renewal of the truce between the two sides.

It was joined this week by Qatar’s Gaza envoy Mohammed el-Emadi who delivered the latest tranche of $30 million in aid to the territory on Tuesday before holding talks with Israeli officials in Tel Aviv.

Sources close to the Qatari delegation said the Israelis had told Emadi they were willing to resume fuel deliveries for the power plant and ease their blockade if there was an end to the fire balloons, the AFP reported, but added that have been some disagreements on several issues.

The video below shows smoke rising in Gaza after Israeli strike targeting a post that is reportedly belonging to Hamas Resistance movement. 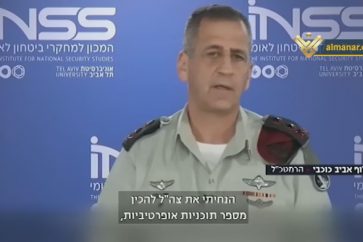