Iranian Foreign Minister Mohammad Javad Zarif has sent a letter to UN Secretary-General Antonio Guterres to mention the threats posed by the US government’s illegal measures, such as its unilateral withdrawal from the JCPOA and its sanctions against Iran, a spokesman said.

In a post on his Twitter account, Foreign Ministry Spokesperson Abbas Mousavi said the top Iranian diplomat has written the letter to the UN secretary-general on Friday.

In his letter, has mentioned important tips about the US’ illegal withdrawal from the 2015 nuclear deal, the unilateral sanctions against Iran, the brazen, repeated and constant violation of the UN Charter, particularly the breach of Article 25 of the UN Charter, which have threatened the credibility and integrity of the United Nations as well as international peace and security, Mousavi said.

The top Iranian diplomat has been in contact with the UN chief since the outbreak of the novel coronavirus.

In a letter to Guterres in March, Zarif denounced the US’ sanctions as a major obstacle to the Islamic Republic’s fight against the coronavirus and urged that such unilateral and illegal sanctions should end.

Zarif emphasized in the letter that despite Iran’s scientific capabilities and the commitment that the country’s health system has shown to the fight against the coronavirus outbreak, the US’ sanctions on legal trade and the preconditions that the United States’ authorities have set recently in order to prevent the sale of medicine, medical equipment and humanitarian supplies have posed serious obstacles to the efforts to battle against COVID-19 in Iran.

Khatibzadeh: No Interim Agreement on Agenda in Vienna Talks 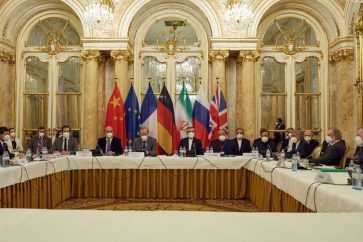 Iran Not to Sacrifice National Rights for Fake Deadlines