Sayyed Nasrallah clarified that Hezbollah has chosen Hermel as the location for the ceremony this year in honor of the sacrifices its people made to achieve liberation and victory.

He also referred to the threat that is still present in Biqaa barrens which were taken as haven by the militants who escaped after their defeat in Syria, explaining that these still carry the threat of suicide bombings and booby-trapped cars with them.

His eminences saluted all the resistance movements in Lebanon, from the Islamic Resistance to Amal Movement and other Lebanese and resistance factions for their sacrifices that led to victory in May 2000.

He further saluted the Syrian Army which also offered sacrifices, and addressed the new generation which didn’t witness the occupation and liberation, assuring to them that if it weren’t for the efforts of the resistance movements there wouldn’t have been any liberation because relying on the West, UN, or Arab league would’ve only been for the benefit of Israel.

Internally, Sayyed Nasrallah noted that a new electoral law is being discussed in a positive manner; giving hope to the Lebanese that elections will take place. He further commented on the internal Lebanese issues proposed in the Riyadh summit, saying that: “I would like to relieve the Lebanese people regarding the stances issued in Riyadh Summits and tell them it that it will have no influence on the internal situation due to the efforts, rationality, and harmony of the Lebanese people.”

“Since the presidential elections, we assured that we agree on all the internal files but disagree on the regional files,” he added.

Regarding the developments in Bahrain, his eminence reassured the wisdom and peaceful approach that Ayatollah Sheikh Issa Qassem used while leading the Bahrain movement. On the other hand, he was confronted with violence and oppression by the Bahrain regime.

Sayyed Nasrallah pointed out that Bahrain king chose to escalate after the Riyadh summit and after taking the green light from US President Donald Trump. He also noted that Bahrain king is considering taking serious action against Ayatollah Issa Qassem as he is making regional telephone calls asking countries’ presidents if they would receive Sheikh Qassem in their country.

His eminence asked the Lebanese president to reject this proposal by Sheikh Hamad Al-Khalifah.

As for the Riyadh Summit, his eminence stressed that the sentence issued after the summit was only a US-Riyadh sentences as none of the countries that participated in the summit had an idea about its content, knowing that the sentence falsely claimed that all its points were discussed and agreed on by the participants.

“Why all this honoring to Trump by the Saudis knowing that he is the US President who mostly offended Arabs, Muslims, Gulf countries, and Saudis in his electoral campaign? Isn’t he the first president to forbid Muslims from eight countries to enter USA? Didn’t he say that Saudi Arabia is a dairy cow that we should milk and throw away? Isn’t he the president who loves Israel the most?”

“The Saudis honored Trump this much only to protect themselves especially amid the wide criticism and files opened against them specifically for standing behind the Takfiri groups,” his eminence explained.

Another reason behind all this honoring is trying to convince Washington to engage in a direct clash with Iran and the resistance axis.

Sayyed Nasrallah considered that Saudi Arabia needed to bribe Trump to preserve its role in the region especially after its failures in Yemen, Iraq, and Syria.

He further indicated that while Saudi Arabia offered all these money and presents to Trump so that he wages a war on Iran, all the US president cares about is money and Israel.

In conclusion, his eminence noted that with all the Saudi political and military failure, the Iraqi and Syrian forces are both advancing in their countries and defeating the militants there.

Additionally, hSayyed Nasrallah stressed that neither Trump’s nor Saudi Arabia’s speech offered anything new as Hezbollah has always been on their list of terrorism and this had never affected it, it rather made it stronger. 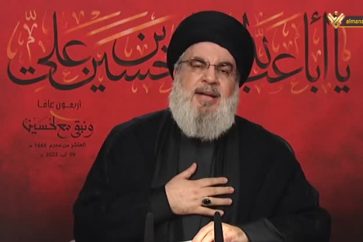