Hezbollah Secretary General Sayyed Hasan Nasrallah denied Sunday having any data around Israeli or US intention to perform any operation before the end of Trump’s presidency dubbing the latter a “crazy who is in a state of severe madness”.

“It is not something only concerning Iran, Lebanon or Palestine but even the Republican and Democratic leaderships are worried about what he could do,” he pointed out, stressing that “the resistance axis should be cautious throughout these couple of weeks so it wouldn’t be dragged into an uncalculated confrontation…”

In an exclusive interview with Al-Mayadeen TV channel, Sayyed Nasrallah revealed that he, along with other Hezbollah leaders are targets for the US, Israeli and Saudi Arabia, adding that the latter have been instigating to assassinate him since many years, even before the Yemeni war began.

“Saudi King, Mohammad bin Salman proposed this issue in his first visit to the US after the election of Trump, and the latter approved assigning this operation to “Israel”,” his eminence clarified, noting that “Saudi Arabia, specifically in the last few years, has been acting with grudge not mindfulness”.

Sayyed Nasrallah disdained Israeli threats assuring that “when you hear Israelis waging threats on media know that there will be no action… and all the action taking place on the borders with Lebanon only reveal Israel’s concern and alertness”.

As his eminence considered that the military operation that targeted Hajj Qassem Suleimani and Abu Mahdi Al-Muhandis was a trilateral US-Israel-Saudi Arabia operation, he remembered Suleimani saying “he had a strong charisma and the power to influence anyone who knows him. He was special on the humanitarian and moral levels. He was a frontline man not a man in the operation room, a man of strategy and tactics and very conscious and well-educated on political and cultural levels.”

“In the last period before his assassination, his role and movement was highlighted a lot in Western media. They usually do that before the assassination of anyone to show their people the significance of the man targeted. I was very concerned about him and I warned him about that,” Sayyed Nasrallah said, adding “I miss him so much, I used to feel that we are one person”.

Lieutenant General Qassem Suleimani, the commander of the Quds Force of Iran’s Islamic Revolution Guards Corps (IRGC), and his Iraqi trenchmate Abu Mahdi al-Muhandis, the deputy head of the Popular Mobilization Units, were assassinated along with their companions in a US terror drone strike near Baghdad International Airport on January 3.

“As for Abu Mahdi Al-Muhandis, he was a great leader and resembled Hajj Qassem so much. He had a major role in both victories against the US and ISIL,” he further stated.

In parallel, Sayyed Nasrallah spoke about the strong relation Hajj Qassem had with all the resistance factions in Palestine and his concern that these factions get all the support they need to resist the occupation, revealing that he was the one behind sending Kornet missiles to the resistance in Gaza Strip.

“President Bashar Al-Assad bought “Kornet” missiles from the Russians, and they are the missiles we used in July war. Hajj Qassem demanded that these missiles be sent to Gaza, and I proposed the issue to President Assad who instantly approved,” his eminence explained, asserting that “I am not surprised with the Arab betrayal to the Palestinians because most of the Arab regimes have only been selling words to Palestine and have only used Iran as an excuse to normalize the relations with Israel. This took place because the Palestinian cause has become a burden on them. There is no excuse for anyone to abandon Palestine.”

As he considered that these countries have long had ties with Israel but were not made public, he assured that this new peace deal is positive because it brought this hypocrisy to public and divided the lines.

“When lines are divided this means a great victory is on its way,” he said.

In this context, Hezbollah SG stated that the relation between Hezbollah and Hamas is based on the legitimacy of the resistance and the Palestinian cause despite the conflict that emerged between Damascus and Hamas due to the Syrian developments.

He further assured that the resistance axis is stronger than before and the Palestinian people have not been influenced by the normalization treaties as they still stand firm and steadfast, praising the joint maneuvers between the resistance factions in Gaza.

While his eminence expressed that the Palestinians of 1948 in the occupied territories want the liberation of Palestine more than anyone else, he stated that “as an Islamist, I find the stance of the Justice and Development Party in Morocco concerning normalization with Israelis more painful than other stances”.

On Hajj Qassem’s role in Iraq, Sayyed Nasrallah revealed that the Iraqi resistance factions who defeated ISIL were the ones who performed most of the operations that urged the US to pull out if Iraq, unlike what media portrayed about Al-Qaeda being behind them.

“I assure to you that the Iraqi resistance groups were the ones performing operations against the occupation under the support of Al-Quds force led by Hajj Qassem Suleimani, and we were in contact with them since then,” his eminence said, indicating that “4 800 suicide attacks were waged in Iraq, while the resistance operations were very accurate and merely against the occupation”.

Moreover, he added that “The US Army had threatened Hajj Qassem and Al-Quds Force to bombard locations in Iran if they continue to support the resistance in Iraq… If it weren’t for the Iraqi resistance, the US embassy would’ve been the one ruling Iraq now”.

Based on that, Hezbollah SG pointed out that “despite the significance of Hajj Qassem and Abu Mahdi Al-Muhandis and their great roles, what happened with them according to our culture, methodology, history and path is a natural and expected outcome because we are in a state of historical conflict… and these two martyrs fell on the path of victories and defeat of great schemes.”

“Our axis does not rely on individuals, and while the goal behind the assassination of Hajj Qassem and Abu Mahdi Al-Muhandis was to erase the name of the resistance, millions of people came out and shouted “we are all resistance… we are all Qassem Suleimani”.”

Hezbollah SG recalled the speech of Imam Khamenei in which he asserted that whoever ordered and implemented the assassination of these two martyrs should be personally punished wherever he is, stating that “this should be the duty of every honorable person in the world, specifically our people in Iraq as Hajj Qassem was their guest and was martyred on their territories.”

On another level, Sayyed Nasrallah stated that “one day after the toppling of former Egyptian
President Hosni Mubarak, Hajj Qassem was in the Southern Suburb of Beirut and expressed discomfort telling us that the Americans will take advantage of the “Arab Spring” to change regimes in the region for their benefit and topple governments that support the resistance specifically in Syria.

“We took his words into consideration and warned the Syrian president who chose to embrace any public movement that takes place. However, funded groups refused any political solution and started using force.”

“We don’t exaggerate when we say it was a global war on Syria. They wanted to replace the regime with another one that supports US policies, submits to Turkey and Qatar, and improves relations with Israel,” his eminence added, noting that “the war on Syria was not only because of its stance from the Palestinian cause but also for its oil and gas and for occupying it and controlling it strategically “.

“President Assad chose to stand firm and never left Syria, and his decision urged us to support him”.

Furthermore, Sayyed Nasrallah revealed that Hajj Qassem went to Moscow and met with President Putin for two hours, playing a major role in convincing him to interfere militarily in Syria.

“After its role in Syria and the regional changes, Russia regained its role in the world through the Syrian gate,” Sayyed Nasrallah assured.

On the Lebanese level, Hezbollah SG stressed that the Israelis have been in a state if alertness for months now expecting a retaliatory attack for the martyrdom of one of Hezbollah members in Syria.

“All the drills and measures the Israeli is taking on the borders are because he is aware that we will respond. The Israeli is in a state of confusion and recognizes that the resistance missiles can reach accurate goals in any place inside the occupied territories, he said, assuring that “the resistance according to the people in South Lebanon is a shield not a burden”.

Answering a question about the influence of Iran-US negotiations on some files in the region, his eminence assured that “Iran, unlike other states, does not buy and sell files in the region. It does not negotiate with the Americans about countries’ affairs on behalf of these countries. It had informed the Europeans that it will not discuss the Yemeni affairs on behalf of the Yemenis and had refused to discuss Iraqi affairs with Washington without the presence of an Iraqi delegation.” 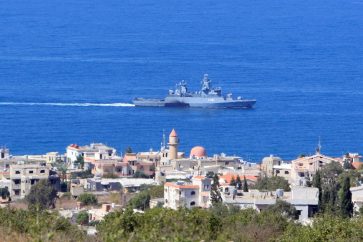 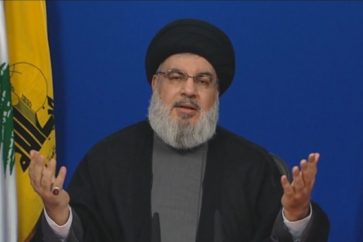 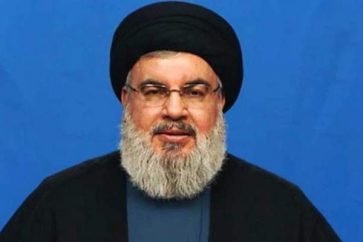