Pro-European centrist Emmanuel Macron promised Sunday to heal France’s divisions after crushing far-right leader Marine Le Pen in a pivotal presidential election that has given him a large but fragile mandate for change.

At 39, the pro-EU former investment banker will become France’s youngest-ever leader but faces a huge challenge to enact his program while trying to unite a fractured and demoralized country.

“I will fight with all my strength against the divisions that are undermining us,” Macron said in a solemn address at his campaign headquarters.

As the extent of his resounding victory sank in, Macron told a sea jubilant supporters waving French flags outside the Louvre Museum in Paris: “Tonight, France won.”

Latest partial results showed Macron winning 65.17 percent of the votes in the first ever election he has contested, far ahead of the nationalist Le Pen at 34.83 percent.

But in a sign of widespread voter disillusionment, one in three voters abstained or cast a blank ballot.

Western leaders largely hailed the result after the shock of Britain’s vote to leave the EU and the election of Donald Trump in the United States.

Macron reached out to Le Pen’s supporters in a plea for unity after a vicious election campaign that exposed deep economic and social divisions, as well as tensions provoked by identity and immigration.

“They voted out of anger, distress and sometimes conviction. I respect them,” he said. “I will do everything I can over the next five years to ensure that people no longer have any reason to vote for extremes.”

Macron’s 64-year-old wife Brigitte, who he wooed when she taught him drama at school, joined him on stage with her children and grandchildren.

German Chancellor Angela Merkel’s spokesman said it was a “victory for a strong and united Europe” and the two had a “very warm” telephone call after his victory was announced, Macron’s team said.

US President Donald Trump, whose beliefs are seen as radically different to Macron’s, tweeted congratulations on a “big win” and said he looked forward to working with him.

The euro rallied to a six-month high against the dollar in Asian trade and other financial markets are expected to react positively.

Le Pen, 48, had portrayed the election as a contest between Macron and “globalists” — those in favor of open trade, immigration and shared sovereignty — and her “patriotic” vision of strong borders and national identities.

In a short speech to supporters, Le Pen claimed a “historic, massive result” and said she had called Macron to wish him “success” in tackling the country’s challenges.

She said her National Front (FN) needed to undergo a “profound transformation” ahead of parliamentary elections in June. One of her aides said the party will change its name. 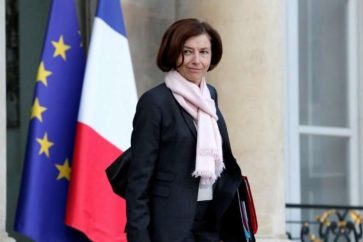