North Korea has passed a law, declaring itself a nuclear weapons state and enshrining the right to use preemptive nuclear strikes to protect itself.

The Supreme People’s Assembly, the North’s legislature, lent its blessing to the law on Thursday, legislating the country’s status as a nuclear weapons state, the official news agency KCNA reported on Friday.

The law determines the occasions on which the country is supposed to deploy its nuclear weapons, including when attacked and also in order to protect its strategic assets.

“If the command and control system of the national nuclear force is in danger of an attack by hostile forces, a nuclear strike is automatically carried out immediately,” the law says.

Experts say the country is to resume testing nuclear weapons, noting that the legislation paves the way for the prospect.

Ruler Kim Jong-un said the legislation made the country’s status as a nuclear weapon state “irreversible.”

“The utmost significance of legislating nuclear weapons policy is to draw an irretrievable line so that there can be no bargaining over our nuclear weapons,” Kim said in a speech to the parliament.

The legislation, therefore, bars any talks on its denuclearization.

Kim said the US and its allies maintain “hostile policies” such as sanctions and military exercises that undercut their messages of peace.

“As long as nuclear weapons remain on earth and imperialism remains and manoeuvres of the United States and its followers against our republic are not terminated, our work to strengthen nuclear force will not cease,” Kim said.

US President Joe Biden’s predecessor Donald Trump took unprecedented steps towards apparently fraternizing the North by initiating several rounds of dialog with it, and even walking a number of steps into the country alongside Kim.

However, Washington blew, what Pyongyang called, a “golden opportunity” at mending the situation by insisting too much on denuclearization. 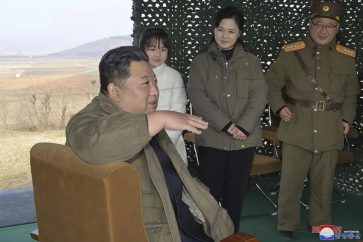