Rocketry force in the Yemeni army and the Popular Committees fired late on Thursday a ballistic missile, “Burkan-1”, at Saudi airport in Jeddah.

Later on, the official Saba news agency quoted a military source as saying that the 12.5-meter-long missile had targeted its target accurately and left massive destruction at the airport.

“Burkan” is a Scud missile developed by the Yemeni rocketry force. The missile range surpasses 800 km, with its warhead weighs half a ton.

The Saudi media claimed that the kingdom’s missile systems intercepted and destroyed the solid propellant and Scud-type missile before it could cause any damage. 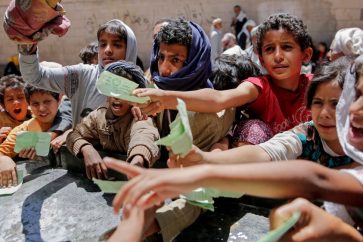 Millions ‘A Step Away from Starvation’ in Yemen, Warns UN Official