The Russian Foreign Ministry insists that US forces withdraw from the 55-km security zone surrounding its Tanf military base, which includes the Rukban refugee camp, the ministry said in a statement late on Thursday.

On February 6, the second humanitarian convoy was sent to the camp by the UN and the Syrian Arab Red Crescent, with the Russian side’s assistance. The first aid convoy was unable to reach its destination, as it was stopped by US-controlled militant groups.

Commenting on the developments, the Russian Foreign Ministry said Moscow’s position on the camp and the delivery of humanitarian cargo there remains unchanged.

“We need to eliminate the root cause – the unlawful US military presence on the Syrian land within the 55-km security perimeter which includes the camp,” the ministry said.

According to Russian diplomats, the camp, which is currently home to over 40,000 people, will receive over 1,000 tons of humanitarian cargo, including food, clothes, medicines and other essential goods. Besides, it is planned to vaccinate about 10,000 children against tuberculosis, polio, hepatitis and other diseases.

“Once the effort is complete, we expect [to receive] from UN officials a detailed report on measures taken and information containing practical proposals on closing the camp and evacuating its residents,” the ministry added.

According to the statement, Rukban is not the only refugee camp whose residents found themselves in a dire humanitarian situation. The Russian Foreign Ministry requests relevant organizations and the international community to examine the situation in Al-Hawl, a camp for internally displaced persons on the outskirts of an eponymous city in Syria’s al-Hasakah governorate where over 30 children died since the start of the year.

“According to information that we are receiving, including from the UN, it [the camp] houses about 33,000 people. The vast majority of them – or about 23,000 people – arrived in December 2018 from the Deir Ezzor governorate, fleeing the military operation conducted by the US and its allies against the ISIL terrorist group [outlawed in Russia] in the city of Hajin, which entailed numerous casualties among the civilian population,” the ministry said. 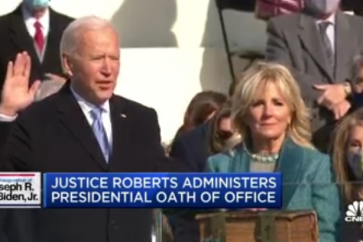 Joe Biden Sworn in as President: ‘Democracy Has Prevailed’