Sayyed Nasrallah: We are Convinced in Our Syria War Involvement, Will Take Part in Any Future One – Al-Manar TV Lebanon
Menu

Sayyed Nasrallah: We are Convinced in Our Syria War Involvement, Will Take Part in Any Future One

Hezbollah Secretary General Sayyed Hassan Nasrallah refrained on Monday from saying anything new regarding the dispute with the Israeli enemy over offshore gas, saying Hezbollah was holding back and watching them babbling.

“I will not speak of anything new. We have said everything that we should say. Now we are all waiting. And whoever waited for more than 10 years can wait for a few more days. No problem. Threats are worthless, and our decision and approach are clear,” Sayyed Nasrallah said in a televised address as part of a festival, a holographic panorama, dubbed “The Alphabet of Victory”.

“Let’s wait and stay calm. We’re always hearing threats and the last of which was from (Israeli Defense Minister Benny) Gantz,” he added.

To us, Sayyed Nasrallah denoted, all of these threats are of no value. “Our decision, rhetoric and orientation are clear and we are awaiting the coming days to act accordingly,” he indicated.

Hezbollah’s leader began his speech by hailing the artistic panorama, dubbed “Alphabet of Victory”, that was performed prior to his speech, narrating the story of the forty years of the Islamic resistance’s ongoing journey.

“When we speak about the resistance’s 40 years, it must be made clear that we do not cut the connection with the time before 1982; there is a deep and fundamental connection to all the efforts, struggles, actions and frameworks that existed before 1982,” Sayyed Nasrallah said.

“We highly appreciate the efforts of our great scholars in our Islamic arena who spread awareness and promoted moral virtue,” he said, recounting the scholars who rallied with the resistance since its emergence, namely Sayyed Mohamad Baqer Sadr, Sayyed Moussa Sadr, Imam Khomeini, and Sayyed Ali Khameni.
“The victory in 2000 put an end to ‘Greater Israel project’ and shattered the so-called ‘invincible army’,” the Hezbollah leader pointed.

Sayyed Nasrallah stated that Hezbollah will not give in to any threats regarding the demarcation of Lebanon’s maritime borders, describing such threats as worthless. “The latest steadfastness achievement of July War is Hezbollah’s involvement in the issue of Lebanon’s restoration of its oil and gas rights,” Hezbollah’s S.G. pointed out.

“We are en route to developing the military infrastructure and capabilities to keep pace with current developments at the level of weapons and technology,” he added.

Turning to Lebanese issues, Sayyed Nasrallah said the Army-People-Resistance formula is firm whether it was included in the ministerial statement or not. He pointed that liberating the remaining occupied Lebanese territories was a national responsibility.

“Part of our responsibility in the coming stage is to establish deterrence equations to protect Lebanon’s land, people and wealth,” he indicated. “Any effort to liberate Lebanon’s occupied lands is a national responsibility. Therefore, Israel’s threats about demarcation of Lebanon’s maritime borders are worthless.”

Regarding the Palestinian cause, Sayyed Nasrallah said it is part of our nation’s religion, culture, honor and dignity, warning that there is no place for abandonment or retreat whatsoever. He also specified that Hezbollah has been maintaining close ties with all resistance groups in Palestine and will continue to do so. “We have also supported the Palestinian refugees and emphasized their right to dignified return to Palestine,” he also said.

Sayyed Nasrallah mentioned in his speech the Lebanese chess champion, Nadia Fawaz, who withdrew from the 4th round of the 28th Abu Dhabi International Chess Festival to avoid competing with an Israeli contender, following the steps of Charbel Abou Daher who also withdrew from the 2022 Youth MMA World Championships to avoid playing against an Israeli opponent for the same reason.

“Our bets are placed on youths like Charbel Abou Daher and Nadia Fawaz who refused to face Israeli contenders,” Sayyed Nasrallah said, hailing their courage amid some Arab’s bowing to ‘Israel’. “We had no problem in developing Lebanon’s relations, especially with Arab states, but some sides want to turn Lebanon into an inferior, we reject this,” he implied.

Elsewhere in his remarks, Sayyed Nasrallah accused the United States of trying to fan the flames of civil war in Lebanon by pitting the resistance movement against the Lebanese army. “There are sides who strive to push the resistance into a clash with the Lebanese army and security forces, this is a permanent and publicized American scheme.” However, he made it clear that Hezbollah won’t be dragged into civil war or sectarian strife.

“Some issues need to be addressed, like the Tayyouneh case due to its deep connection to civil peace,” he said referring to Tayyouneh clashes last October where protesters were attacked by Lebanese Forces gunmen.

Sayyed Nasrallah promised that in the coming stage Hezbollah will be keen on developing and consolidating the understanding with the Free Patriotic Movement.

“Our prime issue during the next stage is cooperating with various political powers in order to build a just and capable state,” he also said. “We look forward towards a state that does not yield to the American embassy’s pressure and to any other embassy or foreign dominance.”

Syria took good part in His eminence’s speech. He praised it as the basis for the Resistance Axis and the steadfastness front, and a partner in the refusal to surrender to Israeli conditions. He further said that the support for Syria is permanent and will never waiver. “Syria is the cornerstone of the resistance front and our partner in refusing to surrender to Israeli conditions,” he said.

Day after day we grow more convinced in our choice and decision to get involved in Syria’s War, he said, warning that “If Syria is exposed to any similar attack, we will not hesitate in getting involved in that confrontation.”

Sayyed Nasrallah voiced optimism in the resistance capabilities, saying: We are optimistic in regards to the balances of strengths and weaknesses which are in favor of the resistance axis. “We will remain part of the resistance axis, we bet on it as an ultimate power capable of facing hegemony schemes and securing sanctities. We have always stood by the oppressed people of the region, including in Yemen, Iraq and Afghanistan and will also do this in the future,” he ended up saying. 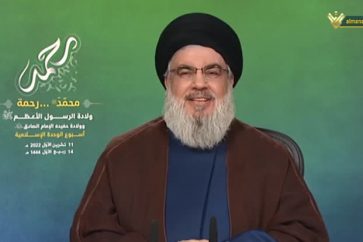 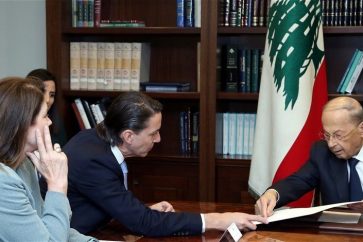