Lebanon’s Presidency of Council of Ministers: Government Has Fully Performed Its Duties before Its Resignation – Al-Manar TV Lebanon
Menu

Lebanon’s Presidency of Council of Ministers: Government Has Fully Performed Its Duties before Its Resignation

“This government set up scientific plans that were foiled by vested accounts and interests, despite being praised by international financial authorities in terms of importance, objectivity and correctness, and it could have put Lebanon on the rescue track.”

The statement added that this government is keen not to engage in futile, yet does not tolerate unfair accusations maliciously thrown at it.

“Besides, this government continues to work diligently as a caretaker government, and it is irrational to see the caretaker role assumed for approximately 11 months now.”

“Before and after the resignation, the government has been picking up the rubble left by the financial policies that you participated in for many years, and your attempts to repudiate such financial policies now do not excuse your past involvement in these policies,” the statement concluded, “Accountability must include those who took part in this financial collapse, and the Lebanese will not give you a clean slate with regard to tearing the country and its people down in the past, then destroying the economy and livelihoods today.” 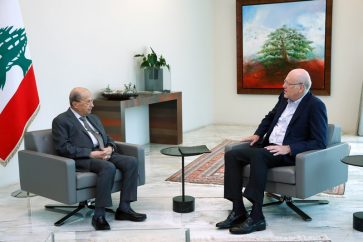