Iran’s ambassador to the International Atomic Energy Agency on Friday rejected the UN atomic watchdog chief’s suggestion that reviving Iran’s nuclear deal after a new US administration comes to power would require striking a new agreement.

In several threads on his Twitter accounts,” Kazem Gharibabadi, Iran’s ambassador to IAEA in Vienna stressed that the IAEA’s “sole role is to monitor and verify the voluntary nuclear-related measures.”

1. As I said before, @iaeaorg sole role is to monitor and verify the voluntary nuclear-related measures as detailed in the JCPOA and to provide regular factual updates in this regard. Presenting any assessment on how the commitments are implemented (e.g referring to breach) 1/3

is absolutely beyond the mandate of the Agency and should be avoided. 2.@iaeaorg played its part during negotiations on the JCPoA. The commitments of the parties and @iaeaorg tasks have been delicately drafted and agreed and each side knows what to do to implement the deal. 2/3

3. There would be no renegotiation on the Deal and in case of its revival, there is no necessity for a new document on the Agency’s role. It’s not needed to complicate the situation. (3/3) pic.twitter.com/c1u1YfCDEy

In an interview with Reuters on Thursday, IAEA Chief Rafael Grossi said there had been “too many breaches by Iran for the agreement to simply snap back into place” when US President-elect Joe Biden takes office next month.
Biden has said the United States will rejoin the deal “if Iran resumes strict compliance.” 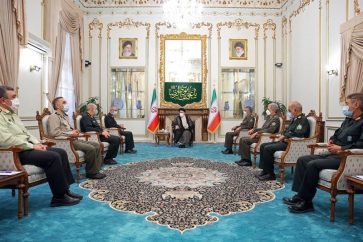