Sheikh Qassem added that after one year all the parties are resorting again to the same solutions, including the reform paper, reinforcement of the judiciary, political cooperation, and fight against corruption.

His eminence stressed that there are two main causes of corruption in Lebanon–the state corrupts and  the US-backed vandals who pervade anarchy and disrupt the national productivity.

“USA devotes its capabilities, pressures, funds, media campaign and sanctions against Hezbollah; however, it will never be able to overcome it.”

Sheikh Qassem emphasized that Hezbollah tries to cope with the socioeconomic problems in Lebanon, adding that it simultaneously confronts the occupation forces and protects the nation from any aggression.

Hezbollah Deputy Secretary General also called on the political leadership in France to avoid the anti-Islam performance, adding that it cannot gain from this approach. 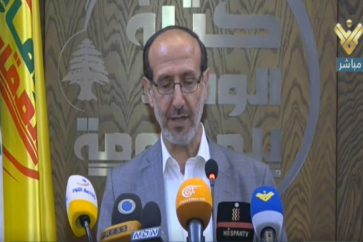 Hezbollah Lawmaker to US Diplomat: Your Corrugate Remarks Filled with Slander and Grudge Due to Resistance Success in Liberating, Defending Lebanon