A military source told SANA Tuesday that the army units in cooperation with the supporting forces carried out, during the past few hours, a wide-scale military operation and established full control over Haiyan gas field after eliminating the latest gatherings of ISIL terrorists.

The source added that the army engineering personnel are working to dismantle the mines and IED planted inside the factory by ISIL terrorists.

Meanwhile, SANA reporter in Homs said that the army units in cooperation with the supporting forces have broaden their control over the western countryside of Palmyra city after the army units established full control over Jahar area, located
to the west of Hayyan Factory as the army eliminated the latest gatherings of ISIL terrorists.

The source added that the army units inflicted heavy losses upon the ISIL terrorists in personnel and equipment, while the army pursued terrorists who fled away towards al-Abar (the wells) area.

The army units continued military operation to the east of Hayyan Factory and established full control over all the hills surrounding it, according to SANA reporter.

In the northern countryside of the province, the source added that an army unit in cooperation with the popular defense groups destroyed a tank for al-Nusra Front on al-Ghanto-al-Halmouz roundabout in the southeastern direction of Jabourin village, north of Homs city.

An army unit carried out an accurate operation targeting a car belonging to terrorists of Jaish al-Fatah who attempted to attack a military post to the southeast of al-Hamamiat village in Hama countryside, according to SANA reporter.

The reporter said that as a result of the operation, the car was destroyed with 3 terrorists on board, while a RPG launcher, an automatic rifle, Terrestrial Trunked Radio (Tetra) device and an ID card of a Turkish officer.

To the east of Salamiyeh city in the eastern countryside of Hama, the reporter added that the army air force destroyed a bulldozer that ISIL terrorists were using in setting up fortifications in Abu Hbilat village. 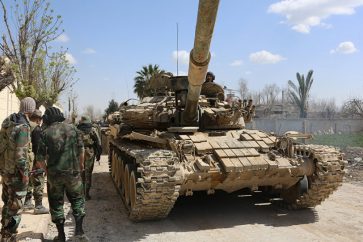 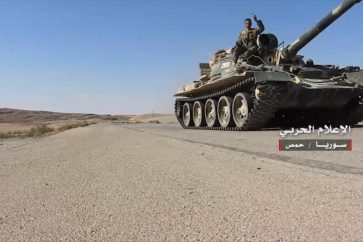