The US House Foreign Affairs Subcommittee on Middle East, North Africa, and International Terrorism held a hearing session in which three Lebanese-American observers testified on the current protests in Lebanon, stressing that Hezbollah would lose much of its influence in the country of the protestors’ demands are fulfilled.

In addition, Jeffrey Feltman, former US ambassador to Lebanon, testified before the subcommittee on the ongoing protests, considering that Lebanon matters to the United States because of the presence of Hezbollah and the “Sunni” terrorist groups as well as the Iranian and Russian plans to control the region.

“In short, Lebanon is avenue for global strategic competition.  Others will happily fill the vacuum if we cede ground.”

Feltman added that Lebanon’s current protests coincide with U.S. interests, considering that Hezbollah is struggling to prove that it is not involved in the corrupted establishment while it protects the allying leaders, like President Michel Aoun.

What basically contributed to the Subcommittee’s session were the testimonies submitted by the three observers who highlighted the protests’ effect on the US interests and Hezbollah influence in Lebanon.

Ghaddar tried in her testimony to consecrate the idea that Hezbollah would lose its influence in Lebanon if the protestors’ demands get fulfilled, adding that creating an independent government in the country would isolate the party.

Ghaddar added that Hezbollah is suffering from an economic crisis thanks to the US sanctions, highlighting that some Shia people joined the protests.

Calling on US to keep its sanctions on Hezbollah, Ghaddar considered that the party serves Iran’s interests, not those of the Lebanese.

Ghaddar also considered that the Lebanese Army Intelligence is close to Hezbollah and arrested activists and protesters for the party’s sake.
“LAF’s Military Intelligence Unit—known to be the closest and most affiliated with Hezbollah and the president—started a wave of arrests of activists. Some are still de-tailed, while others were released with clear signs of torture on their bodies, and with disturbing testimonies.”

For her part, Humud called on the United States to support the Lebanese Armed Forces in order to be able to assume the military and security responsibilities, which would serve the US and Israeli interests.

Humud added that bolstering the protesters’ demands would lead to undermining Hezbollah influence.
“The United States could endorse protestor demands for systemic political change, condition U.S. assistance on responses, and target corrupt leaders regardless of sect. This could require severing ties with political allies, which could lead former allies to seek partnership with alternative external power brokers, including Iran (which supports maintaining the current status quo). Such an endorsement could also lend support to the Hezbollah accusation that protests are part of a foreign conspiracy. Political elites that came to view protests as an existential threat and no longer felt constrained by the need to maintain a relationship with the United States could decide to employ more heavy-handed security measures to suppress the movement.”

Humud also tackled the UNIFIL mission in southern Lebanon, highlighting the calls for reporting the restrictions to its freedom of movement in the area.

“UNIFIL’s mandate was expanded via UNSCR 1701 (2006) to include monitoring the cessation of hostilities between the two sides, accompanying and supporting the Lebanese Armed Forces as they deployed throughout southern Lebanon, and helping to ensure humanitarian access to civilian populations. UNSCR 1701 also authorized UNIFIL to assist the Lebanese government in the establishment of “an area free of any armed personnel, assets and weapons other than those of the Government of Lebanon and of UNIFIL” between the Blue Line and the Litani River.”

Yacoubian concentrated on the dire effects of the economic crisis on the situation in Lebanon, considering that protests would turn violent in case of a financial collapse in the country, which would negatively affect the US security interests.

Yacoubian considered that the US must not support the protests directly, saying that this would backfire.

“Seeking to transform the protests into a cudgel against Hezbollah and Iran will virtually guarantee a descent into violence and chaos. Clearly, Nasrallah has been unnerved by the demonstrations which have occurred in Hezbollah strongholds, signaling its constituency’s deep discontent over socioeconomic issues.”

Considering that Hezbollah is leading the sectarian and corrupt system in Lebanon, Yacoubian pointed out that new system of governance in Lebanon based on strong civic ideals and responsive, accountable and inclusive institutions would dramatically undercut Hezbollah’s influence.

“The wall of fear around criticizing Hezbollah has shown some cracks, even among its own Shiite community, as some have openly criticized the party. Moreover, just as other sectarian leaders are coming under fire, the popular refrain “All of them means all of them” in reference to all of Lebanon’s current leadership has landed on Nasrallah as well.  If allowed to play out, the dynamics propelling the protest movement could reduce Hezbollah’s stranglehold on local communities. It is better to let those organic forces play out, rather than interject and potentially forestall the momentum.” 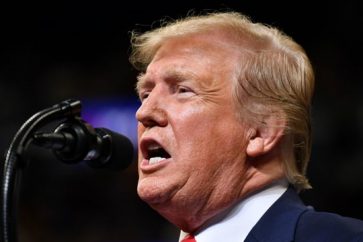 Zarif: Trump Should Change Tack before Pompeo Brings Further Ridicule on US