Israeli government on Wednesday approved the principles of the indirect maritime agreement with Lebanon and Prime Minister Yair Lapid’s proposal to submit the agreement to Knesset.

The members of the Israeli government “expressed support for the importance and necessity at this time of the maritime agreement with Lebanon,” a statement read.

Optimism prevailed on Wednesday regarding the US-brokered understanding on the maritime dispute between Lebanon and the Zionist entity.

In Beirut, Lebanese media reported that an official Lebanese stance is in the making, while the Israeli security cabinet was set to convene in the Zionist entity to vote on the implementation of the deal.

Israeli political and security cabinet had convened on Wednesday morning to discuss the deal before the ministerial vote on the final draft, Ynet reported.

The Israeli security cabinet called to approve the maritime boundary deal as soon as possible.

“There is importance and urgency in reaching a maritime agreement between Israel and Lebanon at this time. Security Cabinet members express support for promoting the authorization process in the cabinet,” a statement from the security cabinet said as quoted by The Jerusalem Post.

From there, the deal went to a full cabinet meeting, and was set to be submitted to the Knesset in the evening, the Israeli media outlet said, adding that the full cabinet is expected to decide whether the agreement will go to a parliamentary vote.

According to the parliament’s Speaker Mickey Levy, the cabinet secretary requested for the Knesset to meet despite the ongoing Jewish holiday of “Sukkot” due to the “importance of the matter.” The lawmakers are set to meet at 1500 GMT, Ynet reported, adding that despite the Speaker’s recommendation, members of the Knesset will only review the terms of the deal but will not vote on its approval.

Shortly after Israeli PM Yair Lapid announced a ‘historic deal’ was reached on Tuesday, Defense Minister Benny Gantz defended the deal, pushing back on the idea that the Zionist entity had rushed to conclude the deal because of threats from Hezbollah.

“Israel had not and will not give up on one millimeter of security,” he said in a statement. “We were determined that the agreement would guarantee Israel’s security interests.”

“The agreement is moving forward despite the threats of the terrorist organization Hezbollah, which tried to sabotage the process — and not because of it,” he continued, as quoted by The Times of Israel.

For his part, Israeli Opposition leader Benjamin Netanyahu said the new maritime border deal is “a historic surrender” to Hezbollah.

“This is not a historic deal, this is a historic surrender,” he said in a statement. “A liquidation sale by Lapid.”

“For over a decade, the government I led did not bow to Nasrallah’s threats, and we did not have war. And then came Lapid. Within three months Lapid surrendered fully to all Hezbollah demands,” Netanyahu said as quoted by The Times of Israel.

On the other hand, Lebanese President Michel Aoun said on Wednesday that the deal will enable Lebanon to extract oil and gas.

“The completion of the deal on the demarcation of the southern maritime border will enable Lebanon to extract oil and gas, and thus will save the country from the abyss,” President Aoun was quoted as saying by National News Agency (NNA).

Meanwhile, Lebanese daily Al-Akhbar reported that US Energy Envoy Amos Hochstein (who mediates the indirect talks between Lebanon and the Zionist entity) informed the Lebanese officials that Lapid is confident that both the Israeli cabinet and the security cabinet will vote in favor of the deal.

Hochstein also told the concerned parties in Lebanon, according to Al-AKhbar, that the official announcement of the deal by the Zionist entity will take place after an agreement between the Israeli government and the Knesset will be reached on some related measures.

The Lebanese paper added that Washington and Tel Aviv agreed that Lapid’s government okays Hochstein’s updated proposal on the deal, paving the way for Lebanon to announce its approval through a message or address by President Michel Aoun on Wednesday or Thursday.

“After that, measures where the deal will be officially announced will be taken. Initial agreements indicate that Lebanon and the Zionist entity will sign on separate versions and will send copies of them to the United States and the United Nations,” Al-Akhbar reported.

In a televised address via Al-Manar, Sayyed Nasrallah called for attentiveness among resistance fighters “as there are those who can change their minds at every moment.”

“The moment the Lebanese see the delegations going to Naqoura, then we consider that things are done and until then we must remain vigilant.” 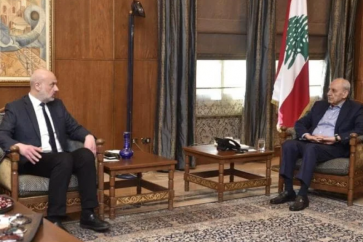