The Supreme Islamic Shiite Council sternly condemned the attack on peaceful civilians in an armed ambush in Tayouneh on Thursday, describing what happened as an unspeakable crime and brutal assault.

In a statement, the Council highlighted the security and military forces’ responsibility in identifying criminals and those standing behind them.

Calling for practicing self-restraint in order to avoid sliding into the anarchy which serves the US plots, the Council demanded that the government and the competent judiciary authorities assume their responsibilities in face of the sedition stirred by the judicial investigator into Beirut Port blast.

The Supreme Shiite Council offered condolences to the families of the martyrs, asking Holy God to grant the injured a speedy recovery and protect Lebanon from the conspirators. 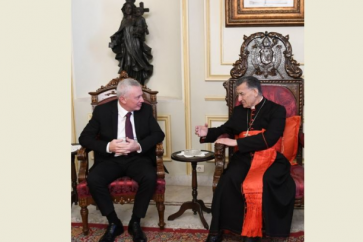 Franjieh from Bkerki: It Is My Constitutional Right to Run for Presidency