Sayyed Nasrallah: Our Resistance The Most Honorable One in Modern History – Al-Manar TV Lebanon
Menu

Stressing that accusations of treason against Hezbollah in the case of Israeli collaborator Amer Fakhoury can’t be accepted anymore, Hezbollah Secretary General Sayyed Hasan Nasrallah described the Resistance as the most honorable one in the modern history.

In a televised speech on Friday night via Al-Manar TV, Sayyed Nasrallah hit back at all those who accused Hezbollah in the case of Fakhoury, who was acquitted by Lebanon’s military tribunal and then released and airlifted outside Lebanon to the United States.

His eminence said that the Resistance party didn’t know of the acquittal in advance, stressing that Hezbollah’s stance in this regard is known and out of moral principles that refuses acquittal of those who took part in murdering and torturing Lebanese people and Resistance fighters.

On the coronavirus crisis, Sayyed Nasrallah called on people to stay home in a bid to prevent the outbreak of the deadly virus, as he slammed the sectarian dealing with the matter.

Sayyed Nasrallah started his speech by saying that he would clarify several issues related to the military tribunal’s decision to acquit Fakhoury, noting that there has been an anti-Hezbollah propaganda aimed at undermining the confidence between the Resistance and its supporters.

“We rely on Resistance supporters’ awareness, faith and patience. Our responsibility is to be transparent with our people whom we care for their smile and their tears.”

His eminence then stressed that Hezbollah did not know of the court’s decision in advance, denying that there has been a deal in this regard.

The Resistance Leader then went on to talk about US pressures and threats to Lebanon in order to release the notorious Israeli collaborator.

“The US has been for six months exerting all forms of pressures and threats against Lebanon in order to release Fakhoury.”

“US threatened several Lebanese judges, some of whom refused to release Fakhoury and some of whom yielded to the pressures,” Sayyed Nasrallah said, noting that Washington threatened to blacklist some Lebanese officials and to halt the military aid to the Lebanese Army.

The Hezbollah S.G. said that when contacted, Hezbollah stressed that he refuses Lebanon’s surrender to US pressures.

He pointed to the great propaganda campaign after Fakhoury was airlifted by US helicopter outside the country.

“The enemy has been propagating that Hezbollah controls Lebanon and its judiciary. Many know that such accusations are baseless.”

His eminence then slammed some Hezbollah allies, whom he did not mention, stressing that “whoever insists on accusing Hezbollah of being responsible for releasing Fakhoury then he insists on keeping himself in the category of opponent and enemy.”

Sayyed Nasrallah also hit back at some comments slamming Hezbollah over the issue of Fakhoury.

“To those who wonder how Hezbollah which launched May 7 (2007) battle over sacking an official in Beirut International Airport, how couldn’t he have a say in Fakhoury’s case: May 7 took place because back then decided on an issue related to disarming Hezbollah and the Resistance weapon was at danger,” Sayyed Nasrallah said, wondering if a similar battle now serves the national interest.

“What would Hezbollah do? Would we make an ambush against the Lebanese Army convoy which was transferrin Fakhoury? Would we kill Lebanese Army officers and soldiers in a bid to prevent the release of Fakhoury? Does this serve the national interest?”

In this context, Sayyed Nasrallah stressed that the blame should be on the United States which violated the Lebanese sovereignty.

His eminence stressed meanwhile that the case of Fakhoury must be followed up by the Lebanese judiciary and the collaborator must be considered fugitive since he was transferred outside the country despite a travel ban.

Sayyed Nasrallah also called for forming a committee to investigate in the acquittal decision by the military court.

Hezbollah S.G. then made it clear that the Resistance Party can’t no more accept accusations of treasons and insults, noting that Hezbollah allies should have ask for an explanation before making such accusations.

“There are two things that can’t be accepted: accusations of betrayal and insults. We offer our blood for our dignity, so it’s unacceptable to accuse us of treason. Whoever wants to be our ally then he must not do these two things, or else let him out of our friendship circle.”

“This Resistance is the most honorable, honest and pure one in the modern history. We are keen to preserve our alliance but it is not acceptable to accuse us of treason and insult us.”

Sayyed Nasrallah in this context regretted that he was put in such position to defend the Resistance in the case of a criminal Israeli collaborator.

Tackling the coronavirus crisis in Lebanon, Sayyed Nasrallah underlined the importance of staying home by Lebanese citizens in order to prevent the spread of the contagious disease.

“We are in a state of general Mobilization and people must bear their responsibility in this regard.”

His eminence slammed the sectarian dealing with the outbreak.

“We are people who live in the same country. It’s shameful to deal with the matter on sectarian basis.”

Sayyed Nasrallah also voiced support to the government’s measures, calling on it to take what it sees appropriate.

“If there is an interest to isolate a region then let the government go ahead with such measure, regardless of this area’s sect.”

His eminence reiterated his call for social solidarity, as he also reiterated Hezbollah’s readiness to put all its health capabilities under the service of the government and the Health Ministry.

“So far nearly 20,000 of Hezbollah’s members and supporters who are involved in the battle against coronavirus.”

Sayyed Nasrallah on the other hand, warned against the spread of coronavirus in Gaza, Yemen and among Palestinian prisoners at Israeli jails.

He lashed out at US President Donald Trump over his comments on coronavirus vaccine and his administration’s sanctions against Iran amid the spread of the coronavirus in the Islamic Republic.

“Trump is racist. He wants the coronavirus vaccine exclusively for the US. Trump is not a human being. He is an alien.” 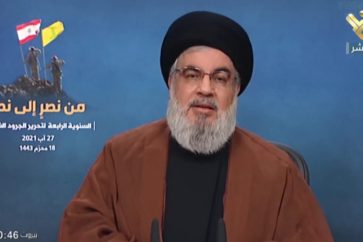 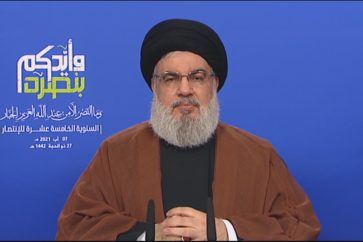