Russian Foreign Minister Sergei Lavrov said Tuesday that he had discussed measures that could be taken to implement Russia-US agreements on Syria with US Secretary of State John Kerry, Sputnik reported.

“Today, we discussed what needs to be done for this agreement to start working in practice in the form of actions taken by our Aerospace Forces, the US Air Force and the coalition headed by them,” Lavrov told reporters.

According to the minister, if agreements reached between him and Kerry in Moscow are implemented, “it will be possible to guarantee the separation of normal opposition members from Daesh and al-Nusra Front terrorists.”

The sides also discussed the situation in Syria in the context of the effectiveness of the fight against terrorism, according to Lavrov.

A new round of intra-Syrian negotiations should be convened as soon as possible, but UN’s Syria envoy Staffan de Mistura has so far been unable to gather all those who should take a part in forming Syria’s future, according to the minister.

“As for today’s meeting between representatives of Russia, the United States and the United Nations, it is dedicated to the need to start work as soon as possible on the political package of Syrian crisis settlement. In accordance with the documents that have been adopted, a new round [of talks]…must be convened as soon as possible, based on the principles outlined by the UN Security Council,” Lavrov told reporters.

“So far, the UN Secretary-General’s envoy, Staffan de Mistura, having such a clear mandate, has failed to gather everyone who should decide Syria’s fate at the negotiating table,” he added.

Syria’s government is ready to work with both the opposition and the United Nations to solve the crisis in the country, but the opposition’s High Negotiations Committee (HNC) has taken on an unconstructive stance,  according to the foreign minister.

“The government delegation and opposition members who gathered at meetings in Moscow, Cairo, Astana, they are ready for such work and have offered a whole series of suggestions on paper that have been handed over to UN representatives. But the so-called High Negotiations Committee, formed at meetings in Riyadh, has taken on an unconstructive stance, not voicing any proposals, setting ultimatums,” Lavrov told reporters.

Nevertheless, Moscow hopes that Tuesday’s meeting between Russian, US and UN representatives in Geneva will result in a joint approach to Syrian crisis settlement, the minister stressed.

“We hope that during meetings between representatives of Russia and the United States — as co-chairs of the International Syria Support Group — and UN representatives today in Geneva, an approach will be coordinated,” Lavrov told reporters. 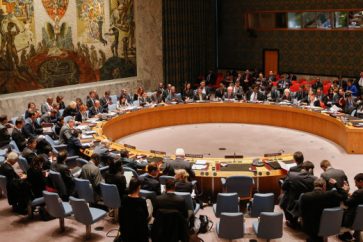