Syrian air defenses have thwarted another Israeli act of aggression against the war-ravaged Arab country, and shot down a number of “hostile” missiles in the skies over the capital city of Damascus.

Syria’s official news agency, citing a military source, reported that “Israeli” aircraft fired several missiles from the direction of Lebanon at areas in the vicinity of Damascus at 1:26 a.m. local time on Friday [2226 GMT Thursday], but most of the projectiles were intercepted and destroyed before hitting any of their targets.

The Israeli military said it was investigating whether the blasts were caused by a Syrian surface-to-air missile [SAM] that might have been launched at an incoming “Israeli” missile and then flown into the occupied lands and landed somewhere near Tel Aviv.

Later on, the Zionist media circulated a photo which shows the shrapnel of a Syrian missile as landed in southern Tel Aviv.

On August 19, Syrian Army’s air defenses intercepted “Israeli” missiles in the surroundings of Damascus and the western city of Homs.

SANA, quoting an unnamed military source at the time, reported that the “Israeli” entity launched an air raid from the direction of southeastern Beirut against some posts in Syria.

“Our air defenses confronted the [‘Israeli’] missiles and shot down most of them, and the outcomes of the aggression are being verified in the meantime,” the source added.

Syrian Ministry of Foreign Affairs and Expatriates later renewed its call on the United Nations and the Security Council to assume responsibilities based on the UN Charter and act firmly to prevent the recurrence of the “Israeli” regime’s attacks on Syrian territories.

In identical letters addressed to the UN Secretary General Antonio Guterres and then president of the Security Council T. S. Tirumurti, the ministry said the Israeli occupation authorities launched an air missile aggression from the southeast side of Beirut, targeting some posts in the surroundings of Damascus and Homs”, Syria’s official news agency reported.

It added that the “Israeli” regime carried out the act of aggression with the purpose of prolonging the war on Syria and raising the morale of terrorists in the northeastern and southern parts of the country.

The ministry emphasized that the continuation of the Israeli attacks would not dissuade the Syrian people, armed forces and their allies from defeating Takfiri terrorist groups such as the Wahhabi Daesh [Arabic acronym for “ISIS” / “ISIL”] and Hayat Tahrir al-Sham as well as other terrorists that are partners of the Israeli entity and the US in acts of terror.

Syria has been gripped by foreign-backed militancy since March 2011. The Syrian government says the Israeli regime and its Western and regional allies are aiding Takfiri terrorist groups that are wreaking havoc in the country.

The “Israeli” entity frequently targets military positions inside Syria, especially those of the resistance movement Hezbollah which has played a key role in helping the Syrian army in its fight against the foreign-backed terrorists.

The Tel Aviv regime mostly keeps quiet about its attacks on Syrian territories which many view as knee-jerk reaction to Syrian government’s increasing success in confronting terrorism.

The “Israeli” entity has been a main supporter of terrorist groups that have opposed the government of President Bashar al-Assad since foreign-backed militancy erupted in Syria nine years ago. 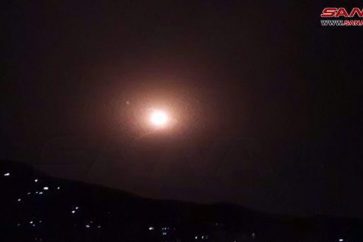 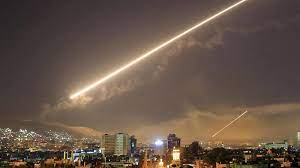